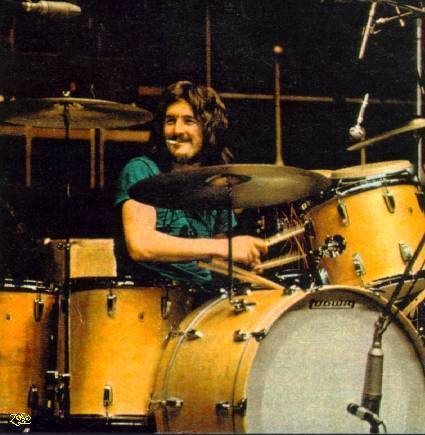 ... Describing the style of John Bonham's drumming instantly conjurs up visions of the thunderous power he created. His contributions to rock music were revolutionary, and his talent unmatched and irreplaceable. You can only imagine Jimmy Page's reaction to first seeing him in 1968, ending his search for a new drummer to form a new band, the New Yardbirds (later renamed Led Zeppelin.)

A childhood friend of Robert Plant, they played together in the 'Band of Joy', resulting in local gigs and a few studio demos. At first, Bonham was reluctant to join the well-known guitarist because of a steady gig with Tim Rose. But... the rest of history...

As John Paul Jones, Jimmy Page and Robert Plant have all stated many times, Led Zeppelin wouldn't have been half as good without him. Along with JPJ, they provided the solid foundation and backbone of the band, which made it all possible. Live performances truly showcased his abilities during the numerous improvised jams throughout every concert and of course his famous "Moby Dick" drum solo; reaching a half-hour in length at times! Immitators are usually left frustrated, since Bonham made it look so easy - not only in his playing but also in the incredible drum sound he acheived. His legendary right foot (on his bass pedal) and lightning-fast triplets were his instant trademark. He later refined his style from the hard skin-bashing approach to a more delicate wrist controlled one - which produced an even more powerful & louder sound with less effort.

His tragic passing on September 25th, 1980 immortalized his legacy forever. His only son, Jason proudly continues the tradition. Daughter Zoe also has a strong interest in music and is experimenting with her own original material. John's sister Deborah is a highly acclaimed & talented singer.

Want to master Microsoft Excel and take your work-from-home job prospects to the next level? Jump-start your career with our Premium A-to-Z Microsoft Excel Training Bundle from the new Gadget Hacks Shop and get lifetime access to more than 40 hours of Basic to Advanced instruction on functions, formula, tools, and more.

Other worthwhile deals to check out:

Join the Next Reality AR Community

Get the latest in AR — delivered straight to your inbox.